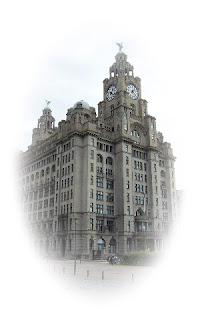 Probably the most photographed and well known building in Liverpool. It is located at Pier Head and stands proud and majestic against the skyline of Liverpool and the riverfront. The building is made of reinforced concrete and was the first large scale building of its type. It was built in 1911 for the Royal Liver Friendly Society.

This impressive architectural masterpiece features a pair of clock towers from which shipping could tell the time as they passed en route along the river. The clock faces are actually larger than the clock face of Big Ben in London. In fact, they are the largest clock dials in Britain. In 1953 electronic chimes were installed to serve as a memorial to the members of the Royal Liver Friendly Society who died during the two World Wars. At night time the clock dials are illuminated.

A statue of a Liver Bird spreading its wings from the top of each clock tower enhances the glory of the building and its impressive features. The Liver Bird, the official mascot of Liverpool is a cormorant (seaweed bird) which in bygone times could often be seen flying alongside the Mersey River with seaweed in their beaks.