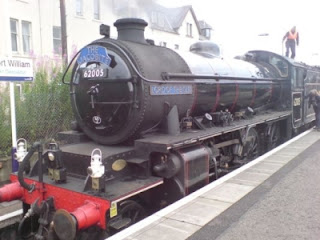 The Jacobite Steam Train from Fort William to Mallaig runs from mid May to October and is very popular with tourists due to its connection with the filming of Harry Potter.

The brochure advertises the journey as one of the ' Great Rail Journeys of the World' and the 42 mile excursion is certainly impressive. Passing past Ben Nevis the train passes through mountains and beautiful lochs, stopping for a short break at Glenfinnan Station.

The scenery is diverse and the train route eventually passes along the sea edge. This is an old train and it captures the essence of a long gone era in much the same way as the filming of Harry Potter where the Hogwarts Express carriages came from this very same company and where the Glenfinnan viaduct and parts of this route were featured extensively in the films.

The 21 arched Glenfinnan viaduct overlooks Loch Shiel and the Jacobite monument.Depending on whether there is sufficient time the train may stop here.

The Jacobite Steam Train is operated by West Coast Railways and you are advised to book in advance for this service in peak season.

More details can be found at: www.steamtrain.info
Posted by Editor at 01:51