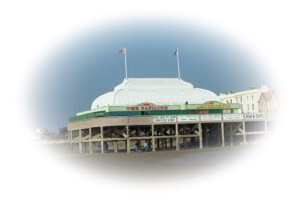 Two prominent landmarks are the High Lighthouse which is 100 feet high and can be seen dominating the skyline on the coast road to Brean Down and the Low Lighthouse with it's characteristic eight legs situated on the beach and clearly visible from the promenade in Burnham.

Burnham-on-Sea is a seaside town which is widely known for its extensive sandy beach. There is a long and superb sea front promenade that would be the envy of many a coastal resort. The central shopping area and High Street are small compared with neighbouring Weston-super-Mare and finding a variety of good restaurants is difficult.

However, general shopping facilities are good and the area is served by well known supermarkets and excellent local amenities.

Burnham-on-Sea would probably be much more popular if it could live up to its name more regularly. The lack of sea and a long walk through muddy sands to reach the sea during most of the daylight hours has, with its shallow waters causing a muddy coloured rather than blue sea, been the cause of ridicule as well as the encouragement for tourists to head further south.

The sandy and wide beach has however attracted other visitors and windsurfers are in their element here. The abundance of the numorous sand dunes also provides shelter and a convenient sun trap for sun seekers intent on topping up their sun tans.

Along Berrow sands by the golf course the dunes have provided an unofficial and popular nudist facility albeit more popular with the gay fraternity rather than mixed naturism. The combination of shallow water and varying tides, with the backdrop of the sand dunes and wide sandy beach can produce some stunning natural scenes and sunsets.

It is dangerous to enter the water at low tide or when the flags are flying and visitors should keep away from the waters edge at these times.

The shallow waters and fast moving tides mean that conventional lifeboats are rendered useless around Burnham which has it's own solution to the problem in the form of small hovercraft which are equally at home on the sand as they are at sea.

Leading from Burnham-on-Sea towards Brean Down along the coast road and passing Brean Leisure Park, the visitor cannot fail to notice the number of caravan and camping sites that can be found within close proximity of the long sandy beach.

Berrow Sands and Brean are accessed by this coastal road which ends abruptly at Brean Down and the Brean Down Bird Garden. Brean Down is the name given to the 320 feet high cliff and hillside that now prevent you from driving any further.