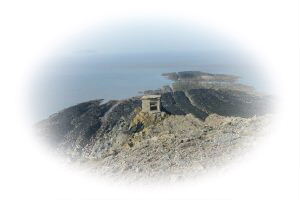 Brean Down, a remnant of the Mendip Hills, stands at around 320 feet in height and juts out impressively into the Bristol Channel. If you look out towards the sea you will the island of Steep Holm which at one time would have been attached to Brean Down.

Due to its secure nature, Brean Down has been home to an iron age coastal fort and a Roman temple. In more recent times and evidence of which remains at the very end of the headland, are the extensive Victorian fortifications on the Western tip.

These fortifications were damaged in 1900 when a soldier accidentally fired his rifle into the armoury and ignited the gunpowder. The first and second World War again saw the site used for defensive purposes.

A walk along Brean Down promises the hiker some spectacular views of both Brean, Berrow sands and beyond, including Weston-super-Mare which until you have reached the top, remains hidden from view. In fact, many people do not appreciate just how close this major resort is to Brean and also how inaccessible it is from this headland.

It is not possible to walk round Brean Down to reach Weston-super-Mare or to cross at the base of Brean Down. Whilst looks can be deceiving, so can the tide which at Brean Down is one of the widest tidal ranges in Europe and the currents around the headland are unpredictable, fast moving and extremely dangerous.