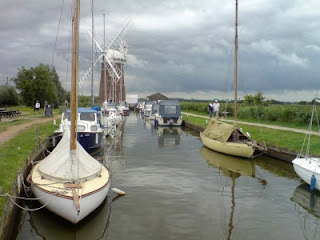 The village of Horsey is a Norfolk Broads village which is just a mile from the sea. The famous windmill is owned by the National Trust and open to visitors. Inside you can read about the Horsey floods and the lives of everyday people including those who manned the windmill over the years.

The stairs are narrow and steep but you can visit each floor until you reach the very top and find yourself standing under the roof with a small balcony providing panoramic views of the countryside.

Many people assume that the windmills that they see in Norfolk were all used for milling flour. In actual fact the majority were used to pump water. Horsey windmill is no exception. It was used to pump water until 1943 when it was struck by lightning. The National Trust acquired it in 1948 and fully restored it.

There is ample parking and a kiosk that sells refreshments on the site.  Visitors can walk to a very quiet beach nearby and Horsey Mere, a windswept broad, is open during the summer months.