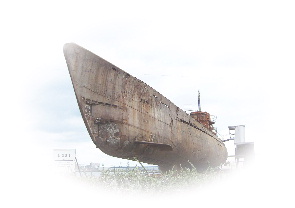 The Warship Preservation Trust at Birkenhead features Historic Warships from World War II and the Falklands War. Upon arriving at the Museum you cannot fail to notice the impressive U534 submarine near the entrance. This is the only German submarine to be raised from the seabed after being sunk.

An array of craft awaits the visitor including a landing craft and visitor centre which displays an array of artifacts, interactive computer displays and display boards. The U534 Museum tells the story of the battle of the U-boats and their gradual decline and dessimation towards the end of the Second World War.

More recent exhibits include the submarine HMS Onyx which carried SAS troops to their destinations around the coastline of the Falkland Islands and HMS Plymouth where the surrender of South Georgia took place in the ship's wardroom. This particular frigate saw action and was hit by four enemy bombs. Suprisingly there were no casualties.

Allow at least 2-3 hours for a good look around. More details can be found at the Historic Warships website : www.warships.freeserve.co.uk