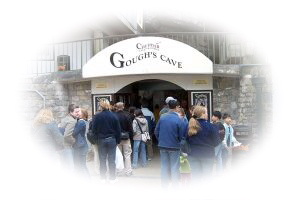 Cheddar Caves and Cheddar Gorge are one of the UK's leading tourist attractions. The caves are reputed to be the most beautiful in the British Isles and Gough's Cave and Cox's Cave are well known tourist destinations.

The whole south side of the Gorge, which includes the highest inland limestone cliffs in Britain and their caves, the 360 acre Nature Reserve, several visitor attractions and most of the Gorge parking, is owned by the 7th Marquess of Bath, of Longleat House.

Gough's Cave has been of great use to archaeologists with its evidence of 40,000 years of human habitation. In 1903 the skeleton of a man who had been buried some 9,000 years ago was discovered and named 'Cheddar Man'. It is the oldest complete skeleton discovered in Britain.

Two hundred years ago water poured from the cliffs and was used to power local water mills. One of the mill owners, George Cox, ran a tea garden for visitors from the newly popular seaside resort of Weston-super-Mare. It was the discovery of Cox's Cave by George Cox's workmen in 1837 that finally sealed its destiny as a major tourist attraction. In 1890 Richard Gough who was the nephew of George Cox, discovered Gough's Cave and added to the impetus of tourism and the now world wide fame that Cheddar Gorge enjoys.

Cheddar Gorge consists of 360 acres of spectacular views and is Britains biggest gorge. The cliffs rise to a height of 400 feet and visitors can walk up the 274 steps of Jacobs Ladder to the lookout tower from where the limestone scenery can be observed at close quarters.

Cheddar Caves and the Gorge is only part of the story and attraction of this picturesque part of Somerset. Cheddar is of course famous for it's cheese which is known throughout the world. The revolutionary "Cheddaring" process, which produces a hard, full flavoured cheese that stores well, was invented here a thousand years ago. Cheddar Cheese is the world's most popular cheese and is made all over the world. Here at Cheddar you can experience the real genuine and original cheddar cheese. Be sure to take some home with you.

Useful links and more information can be found at the following websites: