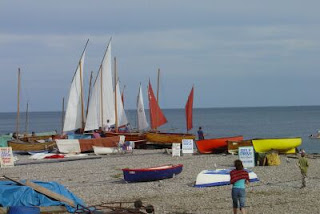 They call it Devon's best kept secret but it's no secret that Beer is a delightful fishing village with its own secluded pebble beach. The imposing and striking cliffs provide the necessary protection and this is part of the World Heritage Coastline designated as such by the United Nations. It is actually England's only natural World Heritage site on account of the importance of the geology.

The village of beer is small and has resisted the advances of modernisation and retained its character. It has a beautiful church and some fine buildings. Fishing still takes place here and Beer is famous for its crab. When we visited we took one of the small boats out and landed ourselves some fresh mackerel.

Beer is a place to relax. Perhaps take a walk along the beach or along the cliffs where you will see some of the finest coastal scenery in the UK.

The name Beer actually comes from the Old English workd "bearu" meaning a small wood. The Romans used limestone from the cliffs at Beer and stone from Beer can be found in Windsor Castle, The Tower of London and some of England's cathedrals. Caves are open to the public and visitors will see large caverns carved out of the rock whilst touring the underground works.


Beer, like many other well known coves along this coast have also a history of smuggling. Jack Rattenbury, a notorious South West smuggler was a native of Beer!