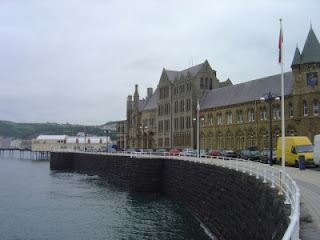 Aberystwyth is a small but vibrant coastal town on the West Coast of Wales in Cardigan Bay. Nestling between three hills, the town has an impressive sea front promenade, castle ruins, a pier and marina.

Facilities are good here with an array of restaurants, pubs and shops to suit all tastes. This is a student town and it has a very large student population. The beach is a gritty shingle beach with some sandy parts but not one of the best examples along this coast. The castle is most certainly worth a look round and although in a state of decay ( caused by erosion and proximity to the sea rather than war ) it used to be one of the finest castles in Wales.

The Aberystwyth Electric Cliff Railway is one of the most popular attractions in the town and can boast that is the longest electric cliff railway in Britain. The steep climb up Constitution Hill is worth it if just for the spectacular views from the top.

Due to its central location, Aberystwyth is home to several National Welsh Institutions which include the National Library of Wales. The harbour, which used to one of the busiest in Wales, has been turned into a marina and is a popular tourist destination and mooring facility for boat owners.